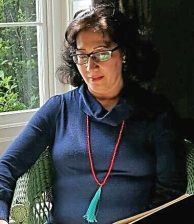 Meisan in Arabic (ميسان) means liberation, apparent oscillation of a celestial body, especially the moon, the shining one, and a sober-minded, level-headed woman. It is the third  brightest star in the constellation of Gemini, making it visible to the naked eye.

Durham-based author Fadia Faqir is a dual citizen of Britain and Jordan. Her work has been published in eighteen countries and translated into fourteen languages. She is the author of five novels: Nisanit (Viking Penguin Inc.,1990), Pillars of Salt (Quartet Books, 1996) My Name is Salma (Transworld Publishers, 2007), Willow Trees Don’t Weep (Quercus Books, 2014), which is partly set in Durham city, and Petra Mon Amour (in progress). The Danish translations of her second and third novels were the runners-up for the ALOA literary award 2001 and 2010 respectively. A prologue entitled ‘At the Midnight Kitchen’ was published in the USA by Weber Studies and won their fiction prize, 2009. She has written several short stories and plays. Her short story ‘Under the Cypress Tree’ was short-listed for the Bridport Prize 2010. Her play, Turn Your Head Not, was premiered in Copenhagen. She is also the editor and co-translator of In the House of Silence: Autobiographical Essays by Arab Women Writers (1998) and was the senior editor of the Arab Women Writers series, for which she received the Women in Publishing 1995 New Venture Award. She was a member of the judging panel of Al-Multaqa Short Story Competition 2016.

She is an Honorary Fellow of St Mary’s College and a Writing Fellow at St Aidan’s College, Durham University, where she teaches creative writing. She is a trustee of Durham City of Sanctuary, a charity that welcomes refugees in the North East of England, and a co-founder of the Banipal Visiting Writer Fellowship.

She often writes on culture, gender, and democracy.